Fish Ick is so common in freshwater aquariums and if you don't know about it, then now is a good time to learn! Successful Ich treatment may take up to a few weeks, but is quite easy once you know how.

Ick is an abbreviation of the scientific name - Ichthyophthirius Multifiliis. It's quite a mouthful, so we abbreviate it for good reason. You will also see it being spelt as Ich or Ick, both of which are considered correct. Another name often used is White Spot Disease.

The name refers to a parasite which lives in our aquariums and also out in the wild. This one in particular lives only in freshwater aquariums. Saltwater Ick is actually a different parasite that is treated slightly differently.

Of all the aquarium fish diseases, this one is so common that I feel every aquarium start-up kit should be sold with some kind of Ich treatment. Just having a bottle of treatment in the kit will help raise the awareness of beginner aquarists.

Don't underestimate it; Ick is a killer if left untreated. Even if you manage to treat it, it can leave long term damage as well as weakening your fish and allowing other opportunistic diseases in.

Fish that don't have scales, like the Clown Loach, are likely to be the first to be attacked by the parasite. They should be treated with extra care, as some of the treatments can also harm these fish.

First off, what does freshwater fish Ick look like? In its most visible form, the parasites will show up on your fish as white spots which are up to 1mm in diameter (each spot is an individual parasite). So yes, it is visible with the naked eye.

I have a few pictures of fish infected with Ich. Click on the images to see a bigger version which opens up in a new window. 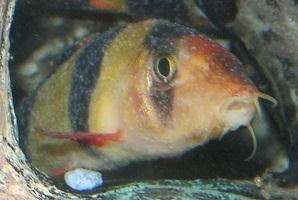 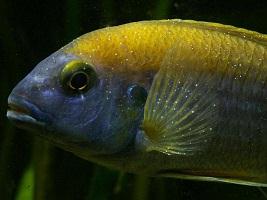 The visible period of Ich is only one stage of the parasites life cycle. We can catch the disease during other stages of its progression by looking out for some other signs of it presence.

The parasite often attacks the fish in the gills first, which we cannot see that easily. So we need to look for more subtle changes in behaviour and looks. Fish can often be seen gasping along with some visible damage to their gills like gill flaring. The eyes of your fish may also start to show a slightly white or milky colour.

Other behavioural signs to look out for are loss of appetite, rubbing against objects in the tank, and they may not be as sociable as they would in their normal state. Healthy fish are also able to carry the Ick disease without showing any behavioural changes. In this case you should wait for visible signs to show.

To treat Fish Ick, we need to know a little about the parasites life cycle and what we can do to change it to our benefit.There are 3 stages of life for Ichthyophthirius Multifiliis and all 3 stages can be occurring at any one time in an aquarium.


The full 3 stage cycle takes anywhere from 5 days to 5 weeks to occur. The time taken is directly linked to the temperature of the water i.e. the warmer the water, the quicker the cycle.

Now the tricky part for us is the fact that Ich treatments available are only able to kill the parasite during the 'Free Swimming' stage. So what we want to do is speed up the process so that this stage happens as often as possible.

Note: Normally sick tropical fish should be removed from an established aquarium and placed into a hospital or quarantine tank. With fish Ick the whole tank needs to be treated together, so placing the fish into a quarantine tank is not recommended.

Once you have almost reached your target temperature you should prepare to start the treatment process. If you are using carbon in your fish tank filter, it should be removed at this point so that it doesn't absorb the medicine from the water.

With the carbon removed you can now add your Ich treatment to the water. Be sure to read the instructions very carefully, they will often have warnings for particular fish that they may harm. Dosages will need to be reduced for fish without scales.

There are a number of products available on the market that has active ingredients ranging from formalin, malachite green, copper sulphate and many more. The following are 3 trusted treatments to cure Ick:


You should continue the treatment process for fish Ick for at least 2 weeks. This way you are sure to kill off all the parasites as they go through the life cycle. Even if it looks like the parasites have been killed off after a few days, carry on the treatment for the full time period.

Regular fish tank maintenance must still be carried out during this time. The small water changes are still very important in keeping toxin levels down. Remember though, if you remove some water you will need to add more Ick treatment in proportion to the amount of water you have changed.

If all goes well you should get rid of the Ich infestation without losing any of your fish, but sometimes, no matter how hard you try, some of your weaker fish may not make it. If you are having a problem now I wish you the best of luck.

Return from Fish Ick to our homepage about Tropical Fish

Home | Blog | Privacy & Disclaimer | Contact Us
© 2010 to 2016 All About Tropical Fish , All rights reserved.
Unauthorized duplication or publication of any materials from this Site is expressly prohibited.