Traditionally there are three ways to deliver either an anti-bacterial or anti-parasitic medication to a fish; in the water, in the food or through a shot. Typically most fish enthusiasts are not going to possess the desire or skill necessary to give their fish a shot. It simply isn’t an option that most people are even going to consider. The problem with in the water medications is that there are some medications that are not going to be good for contact with the scales. Some kinds of anti-bacterial medications (bactericidal) for fish can also destroy the bacteria in a biological filter and cause a lot more problems for the tank than the disease alone. While medicated fish food isn’t perfect it can be the best solution for your fish. Medicated food may be the only option if the type of bacteria you are trying to get rid of needs a bactericidal medication.

The most common parasites for fish are intestinal and skin parasites. There are also a number of species of worm parasites that affect fish. The type of parasite detected is going to determine the type of food to use.  Using the wrong anti-parasitic can cause as much harm as letting the parasite go untreated. For example using a product that is only designed to kill flatworms on a fish that has flagellates is not going to kill the flagellates but may make the fish go through some of the shock of treatment with medication.

Currently the two manufacturers who specialize in this type of food are Jungle and New Life. The more available of the two is Jungle because they are available through common retailers like Wal-Mart. 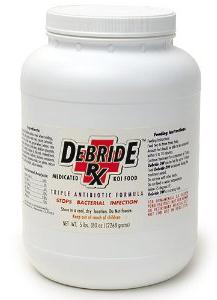 The anti-bacterial medications available for fish are similar to the antibiotics that are used in humans.

The type of infection and severity will determine which type of anti-bacterial fish food to give to your fish.

There are recipes available on various fish enthusiast sites for making your own medicated fish feed from a gelatin base. They won’t be found on this site for two reasons. The first is that concentrations of pharmacological ingredients in foods need to be precise for them to work properly. If a crushed tablet is not evenly spread through the entire mixture the medication may be too strong in some portions of the feed and too weak for others. The second reason is that the Southern Regional Agricultural Center notes that a large percentage of the medication may actually leech out of the mixture before it is used to treat sick fish. This means the fish may stay sicker longer, and may even die because of improper treatment.

Finally, while not completely opposed to homemade feeds, medicated fish food is widely available on the market. With the internet it is available to anyone at any location. There is no need to risk the health and safety of your fish by mixing your own concoction. Premade perfectly measured options are always a superior choice when dealing with anti-parasitic and anti-bacterial medications.

Garlic can be used during medicating fish for two reasons. The first is that garlic is a very tasty treat for fish. Adding garlic to a fish food is an extra insurance that the fish will actually eat the medicine. Secondly for fish with parasites garlic may help in killing the parasites. Many of the anti-parasitic fish foods already contain garlic as an ingredient. Garlic has been shown to have great potential and ability to kill intestinal parasites and is even used as an alternative treatment in humans.

Another type of medicated fish food

is hormone enhanced fish food. These types of food are used to speed the rate in which the fish get in their colors and are usually used by breeders and in commercial uses. The problem with using color enhancing hormones in the food is that they can stunt the growth of the fish and when the hormones wear off the fish are less vibrant. For breeders of fish, using color enhancing hormones can be a great alternative to waiting 6 months to 1 year for fish to fully develop their colors. Knowing color outcomes of paired fish will determine whether or not to breed those fish again.

Many times simply increasing the fish’s food variety and providing better nutrition will be a viable solution for increased color in the average enthusiast’s fish.  Nutrition and maturation are a better option to getting fully developed colored fish for your aquarium. The benefits to this method are that there are no hormones to wear off and the fish will likely see an increase in growth rate rather than a decrease.

Return to our Homepage About Tropical Fish

Home | Blog | Privacy & Disclaimer | Contact Us
© 2010 to 2016 All About Tropical Fish , All rights reserved.
Unauthorized duplication or publication of any materials from this Site is expressly prohibited.